The diagnosis of SSADH is usually made after birth (postnatally) during infancy or childhood (or, in some cases, later in life), based upon a thorough clinical evaluation, identification of characteristic physical findings, and a variety of specialized tests.

Due to the nonspecific nature and variability of associated symptoms, experts suggest that SSADH should be considered in any individuals with two or more features of intellectual, language, and motor delay and abnormally diminished muscle tone (hypotonia) of unknown cause (idiopathic).

Specialized testing to confirm a diagnosis of SSADH typically includes studies (i.e., quantitative organic acid analysis in an appropriate specialist laboratory) that may detect increased concentrations of 4-hydroxybutyric acid (4-HBA) in urine (i.e., 4-hydroxybutyric aciduria) and testing to confirm deficient activity of the SSADH enzyme in white blood cells (leukocytes) isolated from whole blood. (Note: As mentioned above, increased concentrations of 4-HBA may also be detected in plasma and cerebrospinal fluid. In addition, deficient SSADH activity has also been demonstrated in certain cells other than leukocytes.)

ALDH5A1 is the gene that codes for SSADH. Molecular genetic testing to identify bi-allelic mutations (abnormal changes found on both copies of a gene) or deletions in ALDH5A1 is used to make or confirm a diagnosis of SSADH.  This testing is usually ordered by the patient’s pediatrician, primary care physician, neurologist or a genetic counselor and can be completed at a number of facilities around the world.  However, it is imperative that the testing facility specifically test for ALDH5A1.

SSADH is inherited as an autosomal recessive trait. In recessive trait disorders, the condition does not occur unless an individual inherits one copy of a defective gene for the same trait for SSADH from each parent. With each pregnancy the couple has a 25 chance of this happening.

Likewise, the couple has a 25 percent chance of their children receiving both normal genes for the trait from each parent and would have no symptoms and will not pass the disorder on to their children.

Additionally, the couple has a 50 percent chance of their children being a carrier of the disorder, but will have no SSADH symptoms that we are aware of. 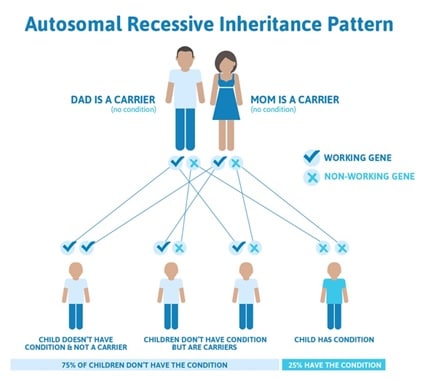